What use is cardboard in our lives? Widely used for packaging and storage, cardboard may mean different things to different people.

Artist Fuyuki Shimazu is eager to share his story about experiences with cardboard and how he associates these paper-based objects with warmth. A cardboard wallet, his creation made of cardboard material, has fascinated people around the world being available for sale, both domestically and internationally, in places like the National Art Centre in Tokyo and Australia.

Mr Shimazu traveled the world and so far has single-handedly explored the cardboard in 30 countries, visiting the places of origin of cardboard which captured his interest. Where does this enthusiasm for creating with cardboard or, to be exact, passion for the cardboard itself come from?

A documentary film From All Corners, released on December 7, 2018, tells a story of Mr Shimazu’s devotion to creating with cardboard and portrays his artistic style. The film looks into the mindset of Mr Shimazu of the millennial generation, his desire to include the cardboard’s narrative and its warmth in the process of creating a wallet.

Fuyuki Shimazu
Born in Kanagawa prefecture in 1987. Graduated from Tama Art University with a degree in information design in 2012. Starts a career as an artist in 2015 after working at Japan’s largest advertising agency Dentsu. In 2009, starts “Carton” project to create wallets from used cardboard picked on the roadsides and in shops. Holds exhibitions and workshops both domestically and abroad. A documentary film From All Corners, exploring his journey, is released on December 7.

Cardboard’s power to connect people: the joy of meeting face-to-face

“While at uni I needed a wallet, so I made one for myself using the cardboard which I happened to come across then,” says Mr Shimazu. “And that was how it all started.” Even before developing an interest in collecting cardboard from around the world, he had a penchant for collecting toys such as mini cars and airplanes.

Fuyuki Shimazu: I have always seemed to like collecting miscellaneous items. I’m drawn to items of different color and design, even if they have the same shape. For example, the design of airplane toys differs depending on an airline company.

This feeling of attraction to a variety of colors and designs might be innate. It equally applies to cardboard, which can stir a collector’s emotions with diverse designs albeit similar shapes. 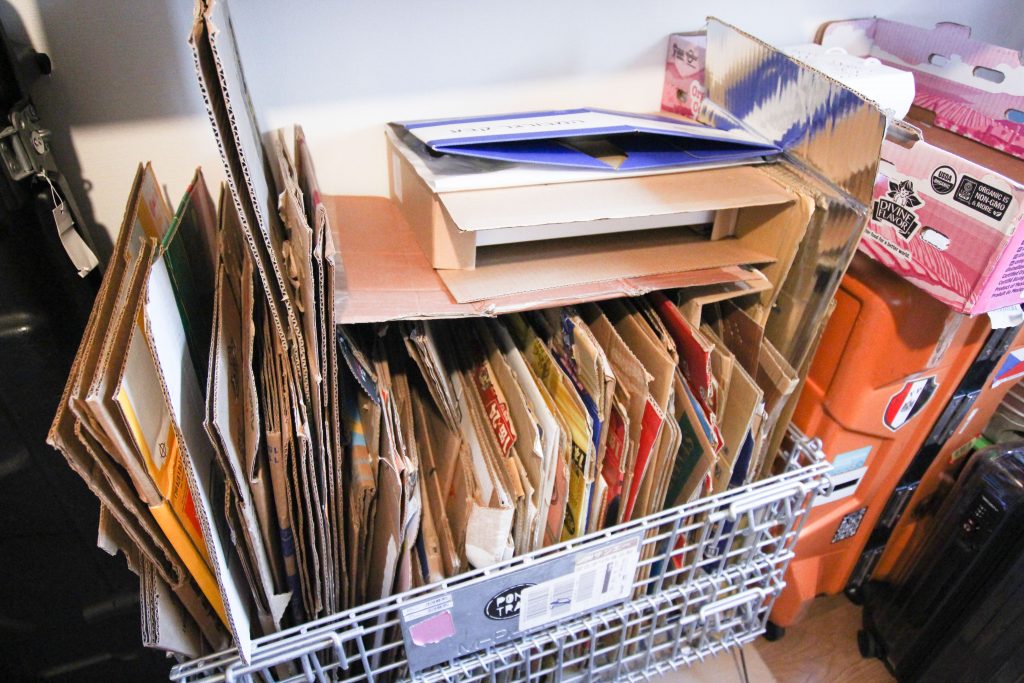 Cardboard samples from Mr Shimazu’s collection inside his studio.

Before launching his career as an independent artist, Mr Shimazu worked as an art director at the advertising agency Dentsu for three and a half years. He points out that while carrying on his creative endeavors, as a maker of cardboard wallets he senses a gap between the current undertaking and his previous work in the advertising industry.

Fuyuki Shimazu: Advertisements cater to a mass audience, and I used to feel wistful that there is little chance to experience direct responses of individual consumers.

Meanwhile, the experience with making wallets turned out to be different. People expressed joy and surprise upon learning about the material used for making wallets. The mood at workshops is equally lively. Interacting with people through this cardboard wallet project reminds me of my earlier days when as a child I enjoyed making people smile by doing magic tricks.

One of the joys of this venture is the ability to communicate with customers face-to-face even if catering to small audiences.

Feeling the warmth through cardboard’s narrative 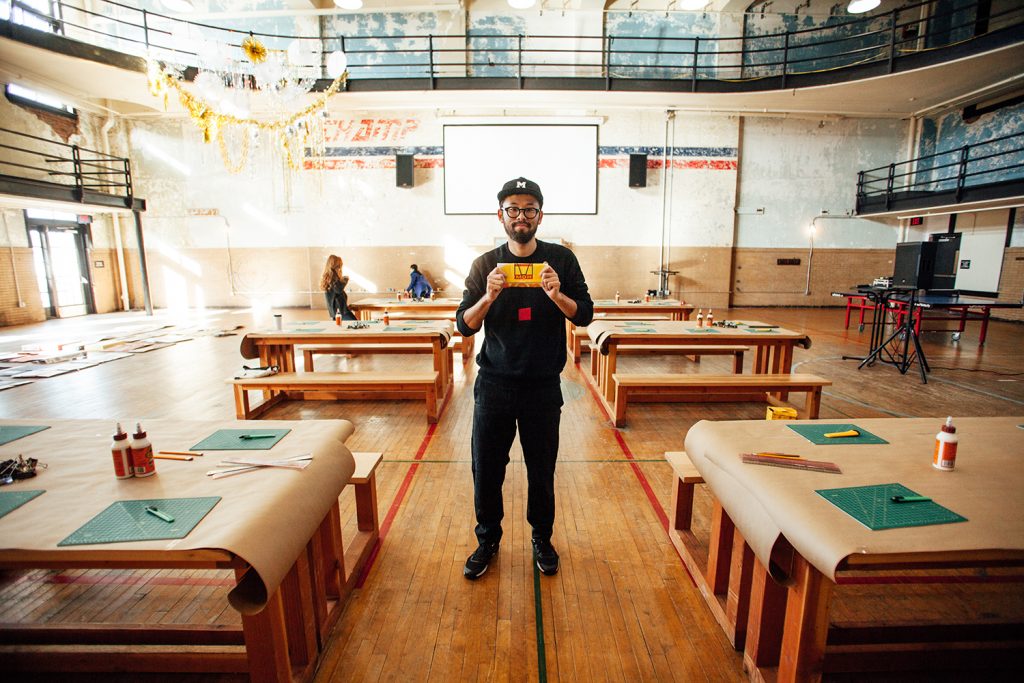 When asked about what cardboards mean to him, he responds enthusiastically with youthful purity in his smile.

Fuyuki Shimazu: My personal discovery about cardboard is its quality of “warmth”. I’m also referring to physical warmth. It is a well-known fact that cardboard beds are used in natural-disaster-stricken areas. The cardboard rolled off a production line would be as warm as freshly baked bread. There is also a narrative attached to cardboard such as the one shown in the film, about the cardboard used for potatoes from the island of Tokunoshima in Kagoshima prefecture. As this is common to all things, looking closer, one may find a story behind any item of interest. The currently released film From All Corners follows Mr Shimazu’s journey as he ventures to discover roots of the cardboard picked in Tokyo.

We also asked Mr Shimazu about his experience when introducing his cardboard art to audiences overseas.

Fuyuki Shimazu: In general, a response from the people is similar. There is a sense of excitement when final touches are applied to a wallet, a moment when the cardboard is transformed into a “ready-for-use item”. Such response is common among all people: whether the Japanese, the Chinese or the Americans. However, the way workshops are held is different among countries. Chinese participants of the workshops display interest in the design patterns which I use for making wallets. Americans are inclined to insert opinions and contribute to the pace of a conversation. Such differences among countries are fascinating.

Start with getting to know what you love to do

We boldly suggest to Mr Shimazu, who has engaged in creative work since college, that there was also an option to do this project while continuing his work at the advertising agency Dentsu. This is how Mr Shimazu responded to our question. 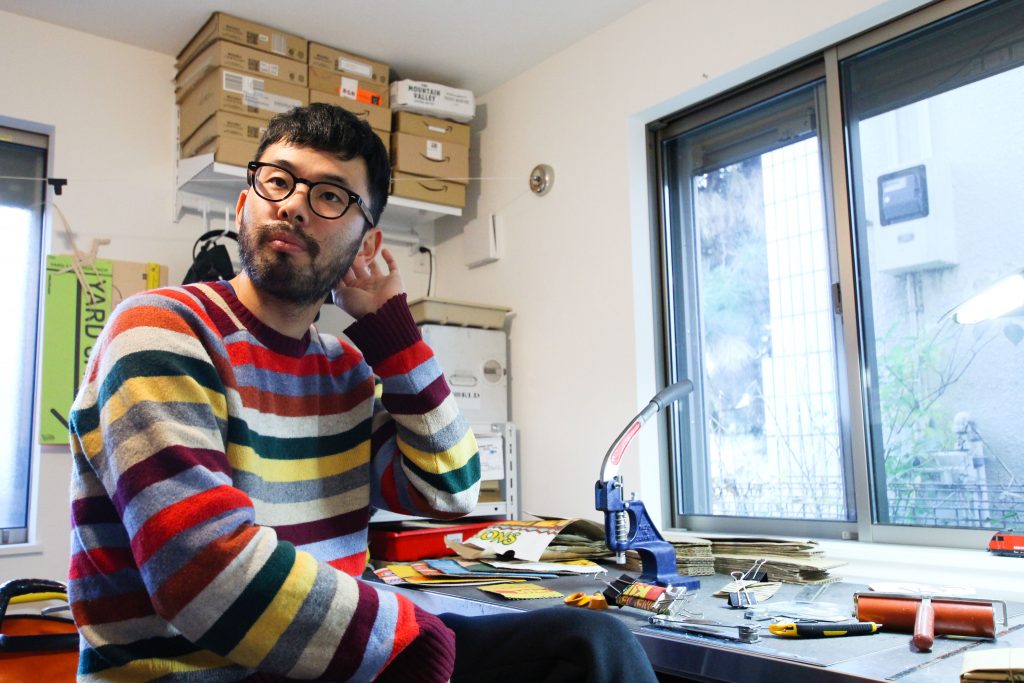 Fuyuki Shimazu: Thinking about my future, I started counting backwards. I wouldn’t want to have any regrets at the end of my life. Two thoughts passed through my mind; “at the end of my life, will I be happy to have worked in a corporate environment my whole life?” followed by “an angst about awkwardness of parting ways with a company when promoted.” I also thought the timing was right, which was three and a half years after joining the company. Despite feeling uneasy about three months before resigning, I made a decision, hoping that three years later I would still be carrying on my cardboard endeavor (laughs).

We ask Mr Shimazu if he has any words of advice to the millennials who might be at crossroads as they contemplate their future careers.

Fuyuki Shimazu: The first step is to know what you love to do keeping a cool head. Facing multiple deadlines at work may lead to stress as little time remains for doing things that one enjoys doing. Still, there is no need to rush decisions as people may have money worries or other personal circumstances. Continuing what one has started is what is important. If I had started my cardboard project fresh from college, I might have had to stop due to lack of funds. Therefore, it is worthwhile to ensure continuity even if through parallel activities.

An initiative taken by the Japanese government in the last couple of years, encouraging companies to drop their prohibition on staff taking side jobs, makes it easier for those who wish to pursue their ideas.

The importance of self-knowledge when pursuing one’s goals

Mr Shimazu recalls his days working as an art director when answering our question about how he has managed to follow his passion thus far. 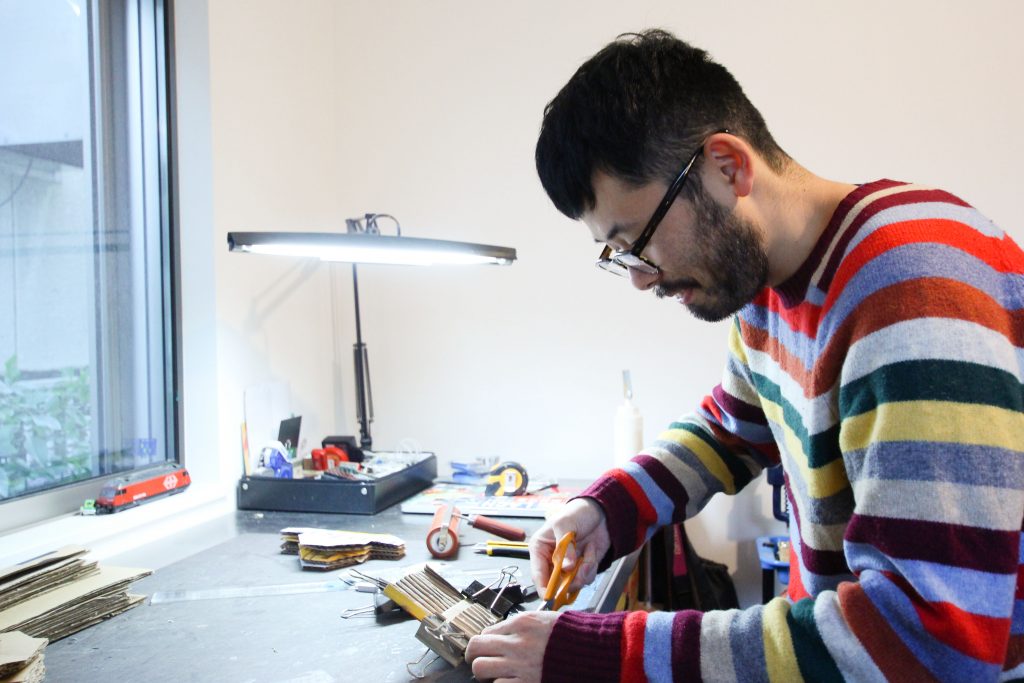 Fuyuki Shimazu: The important part is to know thyself. Before embarking on a career of an art director, I understood that my chosen profession would allow me to create things. Afterwards, I started looking deeper to gain insight into the creative process. Then, I realized that the people’s reaction is what motivates me to take up artistic work. Such reasoning also applies to other occupations. For example, a writer may realize that they are not serving their chosen mission through their work. However, it is desirable to attain this sense of understanding at earlier stages as it may become a little late as age progresses.

As Mr Shimazu’s self-understanding has been a driving force for his artistic work, we also could take a cue from the film to self-reflect on what is most meaningful to us.