Viewed as a cohort at the forefront of profound societal change, Generation Z are people born between the mid-1990s and 2008, and currently aged between 12 and 19 years old. Described through their unique characteristics, they are digital natives, full of entrepreneurial spirit, ethically minded consumers and exhibit a greater awareness of social issues. In Japan, there are many entrepreneurs who could appeal to this generation.

A 19-year-old Yuito Yoneyama is one of them. At the young age of nine, in 2008, he invented a card game “Chemistry Quest” which is played by connecting atoms to build a molecule. Then, in 2011, at the age of twelve, he founded Chemistry Quest Inc., taking a position as the head of the company. Today he is serving as CEO.

As numbers provided suggest, ten years since its launch, the card game remains popular with a wide audience including kids without knowledge of chemistry and grown-ups.

Growing up as generation Z’s digital native, Yoneyama showed interest in computers since the age of three. In the previous article, we followed his journey from childhood to the present day to find out how his character was formed over the years, revealing his inquisitive mind and intellectual pursuits.

This time, we hope to learn about Yoneyama’s business mind and how he sees the future of Chemistry Quest.

Yuito Yoneyama
Born in Kanagawa prefecture in 1999. In 2008, in the third grade of elementary school, invented a card game “Chemistry Quest” designed to play and learn chemical bonding. Founded Chemistry Quest Inc. in the sixth grade, in 2011. In 2012, enters secondary school affiliated with a state university and becomes the head of the company in parallel with attending school. In 2014, becomes the youngest CEO. In 2018, graduates from Komaba High School affiliated with the University of Tsukuba.

Aiming to create a spark for learning chemistry

Even as a pupil Yoneyama thought of Chemistry Quest as his life’s mission, motivated by a desire to arouse people’s interest in chemistry that, as he says, is an intrinsic part of our lives.

Yoneyama: There is a notion that chemistry is an obscure subject whereas in reality this is a field indispensable to us as we experience it in our daily lives. I have hoped the “Chemistry Quest” game would serve as a spark for learning chemistry in a fun way. The reported sales result of 135 thousand copies also reflects the number of people who are getting to know about chemistry through playing the game.

Although feeling happy about people’s response to his invention, he says, he did not know how to proceed further in order to make the game widely available.

Yoneyama: I have set a goal of spreading knowledge about chemistry through the game, but this has become possible thanks to the people around me who provided support and showed me the path.

Knowledge as the key to effective communication

There were also difficulties on his path to fulfilling his dream. Turning a child’s invention into a product implies working with grown-ups, and with no other pupils at the time doing the same thing, he says, he had to learn when to insist and when to compromise. 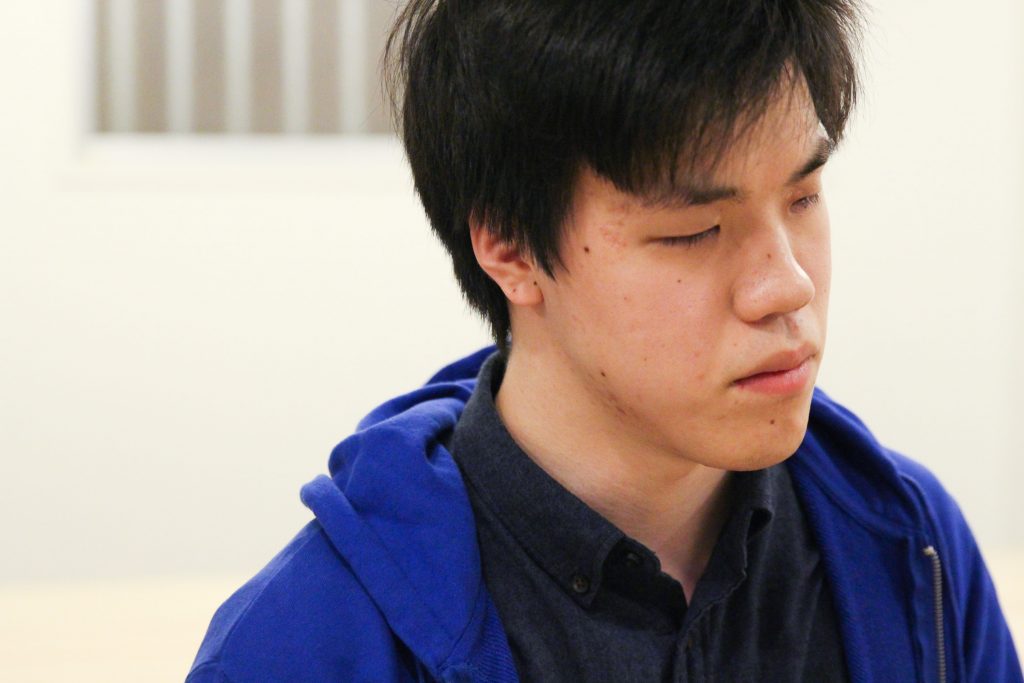 Yoneyama: Originally, I created this game to play and enjoy with my friends. And when I started working with grown-ups on developing a product, I pondered how to integrate my original ideas.

Even for adults, communicating effectively can be challenging at times. However, Yoneyama says he did not feel awkward about his age, and viewed his work with grown-ups as a relationship between a game maker and a content publisher.

Yoneyama: When I decided to start up a business, I realized that this was not a hobby anymore. That is why I was able to work on the project and communicate as an equal partner. In search for answers, one can consult grown-ups. Then, one can make suggestions in regard to alternative ways or improvements. Thus, after obtaining an opinion of a grown-up, one can contemplate how to turn one into hundred. Also, it becomes easier to build an argument when you have a solid understanding of the matter.

We assume the supportive environment, where Yoneyama has been able to openly discuss the project, was shaped by all involved parties’ mutual desire to create the best product.

Taking heed of word of mouth and social media

Yoneyama makes sure to include diverse opinions in the process of product improvement. A new edition “Introductory Chemistry Quest” released in 2016 was compiled based on customers’ opinions about the game.

The elaborately designed first edition of Chemistry Quest was created with elementary schoolchildren in mind but was not recognized as such. 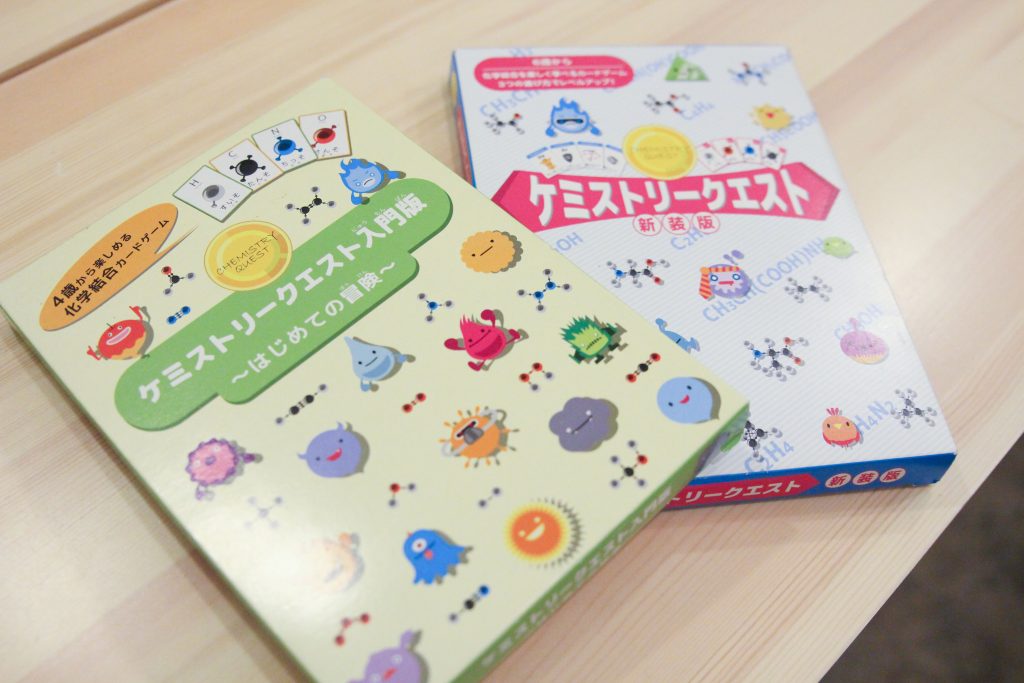 Yoneyama: When the game was released, it was displayed in the “chemistry” section of a bookshop which means it would catch the attention of grown-ups and those interested in scientific literature, whereas I had hoped this game would be a fun introduction for kids to the subject of chemistry.

He consulted the publishing house about creating an introductory edition of the game so that it gets displayed in the children’s section as intended. In the process of creating a new product, he also relies on online customer reviews.

Yoneyama: While I do not regularly follow news in the media, I make sure to stay informed about customers’ opinions by reading social media discussions and blogs. I then apply the collected data to make product improvements.

As Yoneyama is currently busy studying for college exams, no new developments have taken place in his Chemistry Quest project since the release of a new edition of the game in 2016. However, his resolve about the project has not changed one bit and he says he wants to expand his business overseas after joining the college.

Yoneyama: I have ideas for creating a new game, and also I plan to realize my long-nurtured hope to expand overseas. This way, more people will get to experience the Chemistry Quest.

By expanding overseas, Yoneyama hopes for “the Chemistry Quest to become part of a science communication platform”.

To make the game widely available, we assume Yoneyama has his sights set on both bricks and mortar and online presence, as well as aiming for further product improvement.

Yoneyama: My main goal is to create an educational tool. Entertainment aspects of the game may be retained, however, not at the expense of scientific rigor. I hope to make the game even more interesting and at the same time intellectually nourishing and faithful to the principles of chemistry.

Other chemistry-themed games have appeared on the market since the initial launch of the Chemistry Quest game.

Yoneyama says he wants to focus on a niche in the education market so as to draw customers’ attention to the product’s distinct qualities.

A message for young emerging entrepreneurs

The emergence of start-up studios and crowd-funding services today has opened doors for those who nurture business ideas and are willing to take up a challenge of starting a company. These days, we see many young emerging entrepreneurs.

“We are living a dream,” says Yoneyama to his like-minded counterparts. 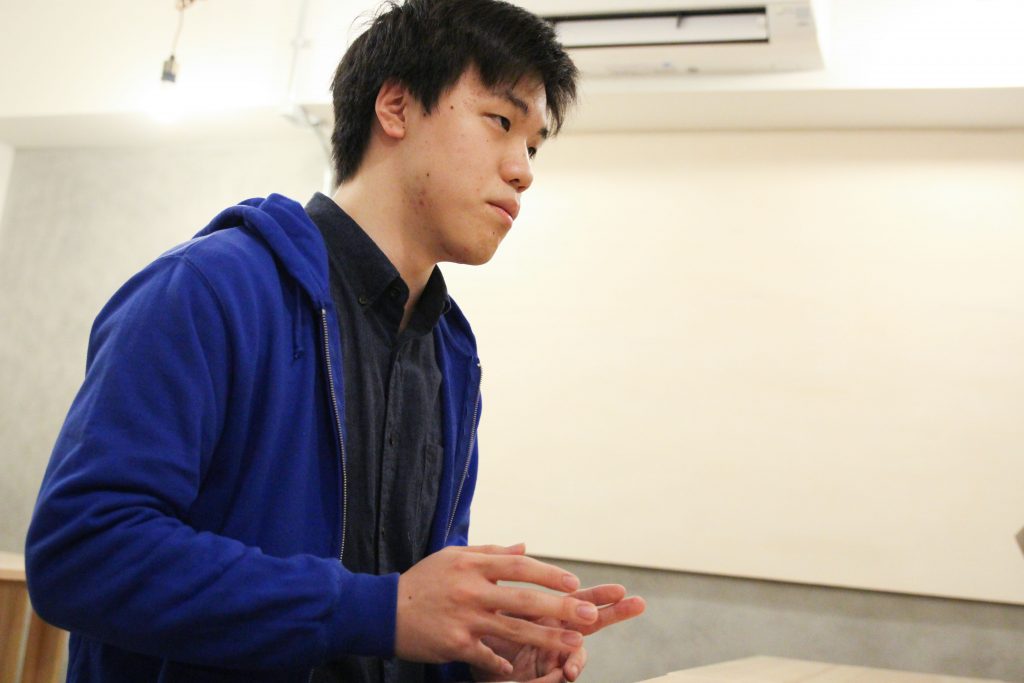 Yoneyama: With modern digital technologies, today we have many ways to communicate to people, spread ideas and get feedback. Spreading ideas can also become a source of income, and there are indices in place which measure the quality of those ideas. We can act on current opportunities to identify the needs and find solutions to societal problems. I am very excited about how we, entrepreneurs, can make a positive difference in the world.