Viewed as a cohort at the forefront of profound societal change, Generation Z are people born between the mid-1990s and 2008, and currently aged between 12 and 19 years old. Described through their unique characteristics, they are digital natives, full of entrepreneurial spirit, ethically minded consumers and exhibit a greater awareness of social issues. In Japan, there are many entrepreneurs who could appeal to this generation.

A 19-year-old Yuito Yoneyama is one of them. At the young age of nine, in 2008, he invented a card game “Chemistry Quest” which is played by connecting atoms to build a molecule. Then, in 2011, at the age of twelve, he founded Chemistry Quest Inc., taking a position as the head of the company. Today he is serving as CEO.

As numbers provided suggest, ten years since its launch, the card game remains popular with a wide audience including kids without knowledge of chemistry and grown-ups.

We remind ourselves that he is only 19 years old and has already discovered his calling as an entrepreneur, embracing the double job of schooling and business management. Hoping to gain insights from a young mind of Generation Z, who has been hailed as a child prodigy, we look into his life’s journey so far.

Yuito Yoneyama
Born in Kanagawa prefecture in 1999. In 2008, in the third grade of elementary school, invented a card game “Chemistry Quest” designed to play and learn chemical bonding. Founded Chemistry Quest Inc. in the sixth grade, in 2011. In 2012, enters secondary school affiliated with a state university and becomes the head of the company in parallel with attending school. In 2014, becomes the youngest CEO. In 2018, graduates from Komaba High School affiliated with the University of Tsukuba.

Inquisitive mind from an early age

He displayed skills of a wizard when started typing and playing games on the computer at the age of three. “Being naturally drawn to our home computer, I started asking my parents how to use Word and Excel,” he says.

At kindergarten, possessing an inquisitive mind, he showed interest in various genres such as space, minerals, fossils and chemistry, voraciously reading books with pictures and text.

“I was blessed with a nurturing environment,” Mr Yoneyama recalls those formative days. 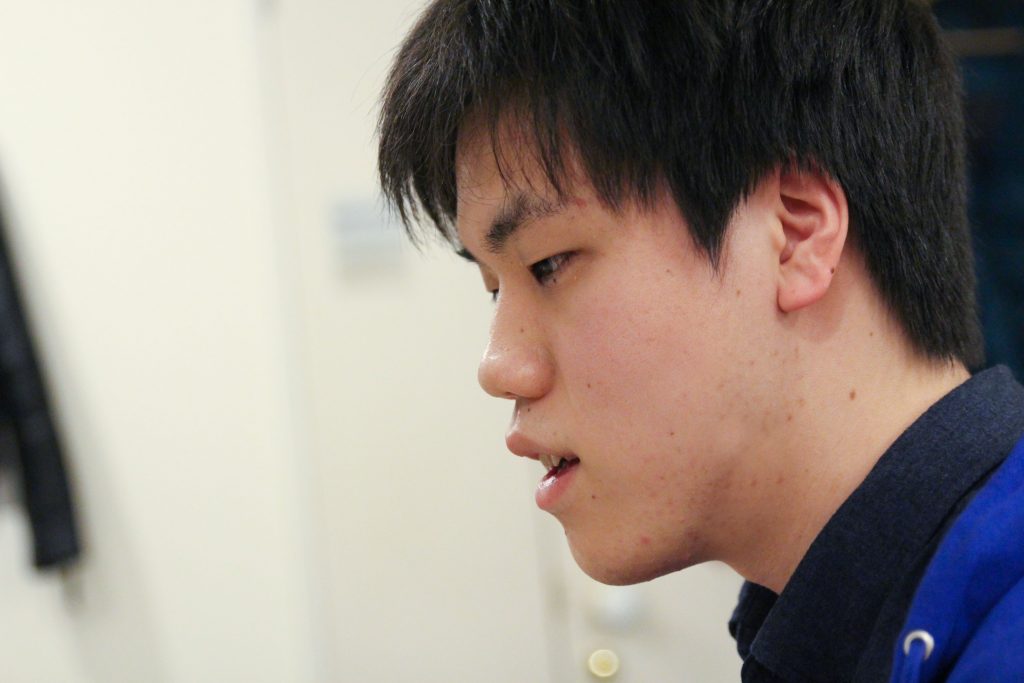 Yoneyama: I began to develop a broad range of interests in kindergarten. The kindergarten held classes in English, adopting Western-style teaching techniques. The curriculum contained practical activities, taking learning through play approach. One of those activities was about the solar system, and combined with the fact that the space agency Jaxa (the Japan Aerospace Exploration Agency) is positioned in my home town of Sagamihara, this stirred my initial interest in space.

Although Earth and other planets making up our solar system appear to have the same shape, their chemical composition varies. For example, while the atmosphere of Earth contains oxygen, nitrogen, and trace amounts of carbon dioxide, the atmosphere of Mars and Venus is mostly composed of carbon dioxide. Fascinated by the design and magnitude of the natural world, Mr Yoneyama embarked on a path of pursuing knowledge.

The kindergarten setting was conducive to learning, and as the classes were in English, he also read English books. Learning about space spurred his interest in minerals.

Yoneyama: Curiosity about space led me to questions about the history of Earth, which in turn steered me to the subject of fossils and minerals. Just like the planets of the solar system, minerals are composed of distinct elements. That is why atomic symbols are used to describe a specific mineral. This is how I developed interest in chemistry which has become a theme of the “Chemistry Quest” project.

Although Mr Yoneyama mentions about supportive environment, we can’t help but wonder about how he has maintained motivation to study in depth. We find out about big influence of people close to him.

Yoneyama: When I shared my thoughts with my friends’ parents, they reacted with interest. When it comes to difficult subjects, I think even grown-ups may not always be agreeable. But as it happened, I only received positive responses which encouraged me to pursue my interests. The motivating factor for me is that I find it interesting to share knowledge with people, bringing up topics which would stir their curiosity.

When Mr Yoneyama was in the third grade of elementary school, playing Shinkei-suijaku card game with a friend during lunch time gave him an idea to create a different card game which led to a launch of the “Chemistry Quest” project.

As the public school he attended did not allow bringing personal toys to school, many of his bright and motivated school friends enjoyed inventing original games using the art of origami. 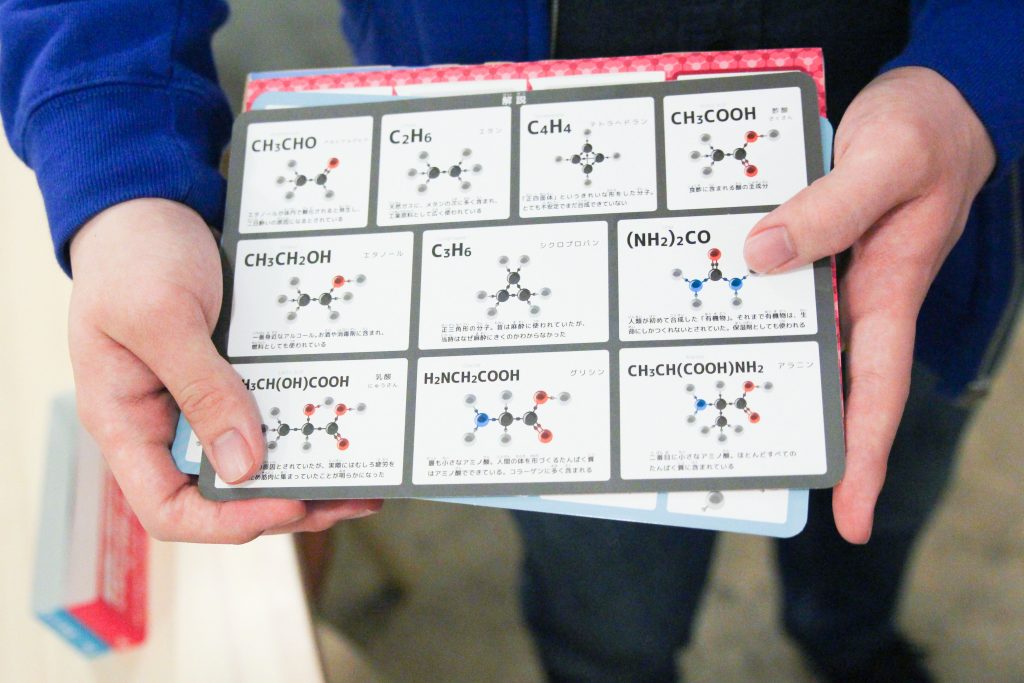 Yoneyama: In the second grade, my friend and I made a paper currency using origami, and played shops imitating a shopping mall. Then, in the third grade, I saw how my friend used origami to create a card game which provided me with an idea to invent an original card game on my own.

Whereas other kids were inventing games which involved play partners, Mr Yoneyama thought up a game which can be played by one person. That was a period when he developed a strong interest in chemistry. At the time, his friends displayed little interest in the subject, which made it difficult to bring up the topic of chemistry during conversations. Such situation spurred Mr Yoneyama to include chemical elements in the game.

Yoneyama: Each card in the game represents an atom. Players can form molecules by combining these atom-representing cards. When a molecule is formed, a player gets rewarded with a card. This way, one can enjoy the learning process through play even without a play partner present.

“When I invented the “Chemistry Quest” game, I was not thinking about starting a business, but only hoped to make my friends interested in the subject of chemistry,” he says.

However, things changed when he was in the fifth grade of elementary school. He presented the “Chemistry Quest” game at “Tokyo International Science Festival 2010” event attended by kids and grown-ups alike. Participants of various ages played the game during the event, and Mr Yoneyama got to experience first-hand how much they enjoyed it.

He says he was sincerely touched by the suggestion to market the game as a product.

Yoneyama: I had a wish for more people to experience the game, and if it could be achieved through commercialization, then I thought why not. Still, as there is a limit to how many game sets one can single-handedly distribute, setting up a business to reach a wider audience was also an option to consider.

Having a business idea in mind, the next steps he took were characteristic of his generation Z. He turned to the internet to learn how to start a business.

He finally found an answer in “working with a publishing company to market a product”.

Yoneyama: I knew people who could give me advice about marketing the “Chemistry Quest”. Today, creating a digital product would allow reaching a broader audience, but at the time, smartphones were not as widely used as now. That is why mass production was a viable option. So I decided to create a business start-up as a means to let more people experience the “Chemistry Quest”.

Hence in 2011, Gentosha publishing house released the “Chemistry Quest”. The company Chemistry Quest was formed in the same time period, Mr Yoneyama taking up a role of the head of the company as young as twelve years old.

A business start-up would imply changes to one’s daily routine and lifestyle, and even more so for a sixth grader facing a task of balancing school and work. However, juggling a start-up with study has been smooth so far, says Mr Yoneyama.

Yoneyama: Since starting a business until now, I have managed to pursue my goals both at work and at school. My friends tend to focus on what they love to do, and with the support of people around me, I have been able to adjust.

Looking back at his school years, he says the lively discussions with friends were a source of a lot of joy.

Yet Mr Yoneyama also mentions about weak points of his journey, saying although committed to his chosen areas of interest, there was a sense of detachment from other areas such as schoolwork. 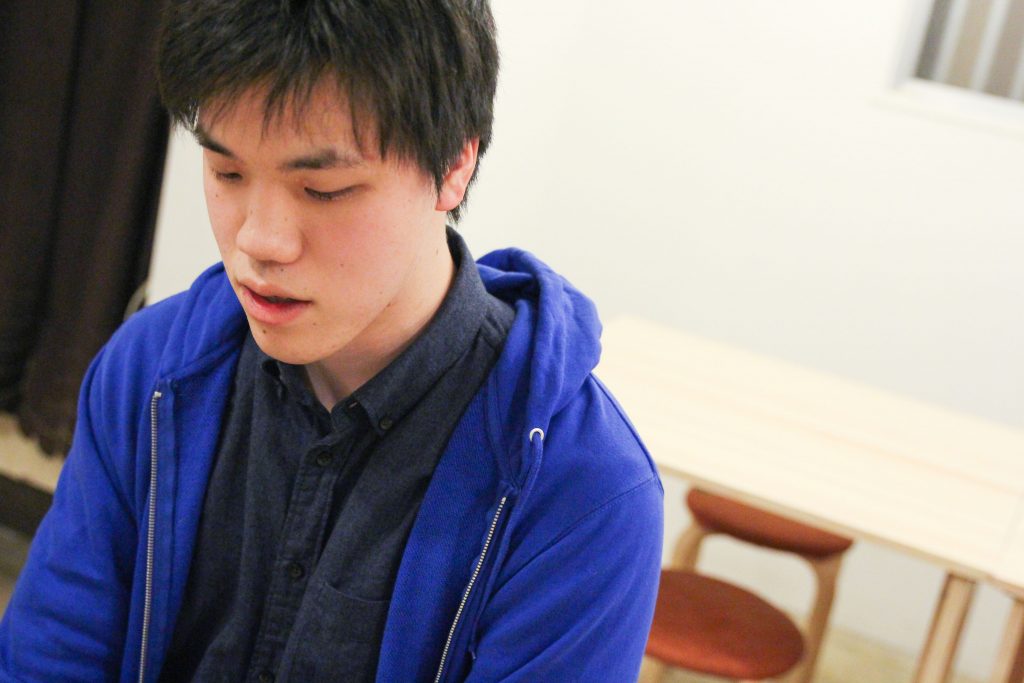 Yoneyama: Passing tests at school seemed an easy task, and with a mindset like that, I had little motivation to make more effort. So in high school years, I was mostly focused on working on the new edition of the game.

In response to customers’ requests, a new edition “Introductory Chemistry Quest” was released in his second year of high school in 2016.

As he had to work on a new product while attending school, Mr Yoneyama used e-mail as a means of communication with the publisher. Luckily for him, Gentosha publishing house was located close to his high school, so he could attend business meetings after school.

Yoneyama: Once e-mails from the publisher piled up, I would go to see them to discuss such matters as cost estimation and the number of copies to be ordered.

Worries and expectations for the future

19 years old as of today, Mr Yoneyama is preparing for college entrance exams making up study hours that he has put off until now. Moreover, he has decided on the field to study in college. He wishes to focus on urban engineering, a field he has been drawn to since school years when he was a member of a railway club.

Yoneyama: I want to study urban engineering in college. As it is narrowly applied in the real world, I hope to acquire technical skills, and then decide on how to plan my future.

Along with the new field of study, Mr Yoneyama still has to attend to the needs of the Chemistry Quest project. Although he feels anxious about balancing tasks and routines, he says there is also a sense of anticipation.

Yoneyama: I believe that being engaged in various projects simultaneously would be a very interesting endeavor for me. However, I do understand that in addition to devoting time and energy, and being persistent, I also need to develop self-management skills to accomplish my goals.

So far we have followed Mr Yoneyama’s journey from childhood to present to gain insight into his character and commitment to the pursuit of knowledge.

Next time, we intend to look into his business mindset and plans regarding the “Chemistry Quest” project.